The Ultimate Guide to the Possessive In English -

> Blog > Learning Resources > The Ultimate Guide to the Possessive In English

The Ultimate Guide to the Possessive In English 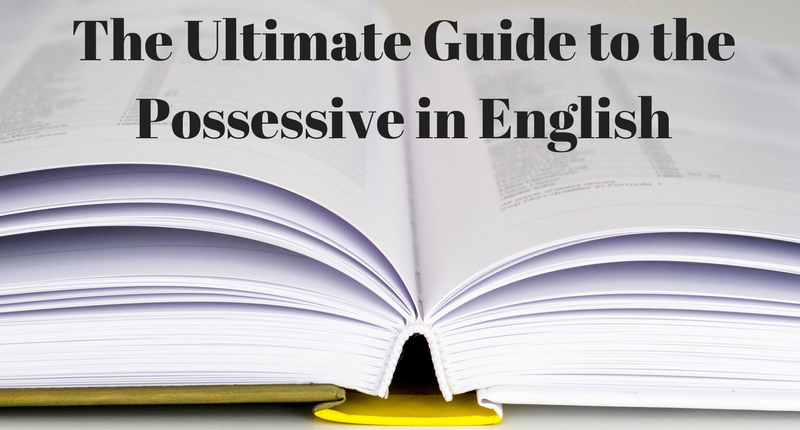 When we want to show that something belongs to someone or something we use the possessive in English.

There is a party tomorrow at David’s house.

This is my grandparents’ favourite place.

The children’s shoes are so dirty.

Some other common examples of irregular plural nouns are:

So that we don’t repeat ourselves, we can use the possessive instead of a noun phrase:

Whose coat is that? It’s Tanya’s.

The structure of forming a possessive can be used for whole phrases. Such as:

We use the possessive with proper nouns (names) very often in English.

When a name ends in s, we usually treat it just like any other singular noun.

In some cases, with older, classical names or very important figures, it is also possible to just add the apostrophe (‘)

We use possessive adjectives in English in three main ways.

Whose coat is that? It’s Tanya’s.

If we didn’t know the names of the people, we could change the sentences as follows:

Whose coat is that? It’s hers.

We can use possessive pronouns after of:

Jim is one of my classmates.

Jim is a classmate of mine.

But we couldn’t say

Jim is a classmate of me.

We use whose to ask who something belongs to. We can do this in two ways:

Reciprocal pronouns are used when two or more people do the same thing. For this, we use each other and one another.

In its possessive form, we use each other’s or one another’s. For example:

So there we have it, this is our comprehensive guide to possessives in English, covering, nouns, adjectives, pronouns, questions and reciprocal pronouns. If you have any questions, please don’t hesitate to ask us. If you would like to learn more why not check out this post: English Grammar – this, these, that, those.